Wondering how many buses we have? How many people we carry and how far we travel in a single year? Then check out our fast facts to learn all about our services, amenities, finances and so much more. 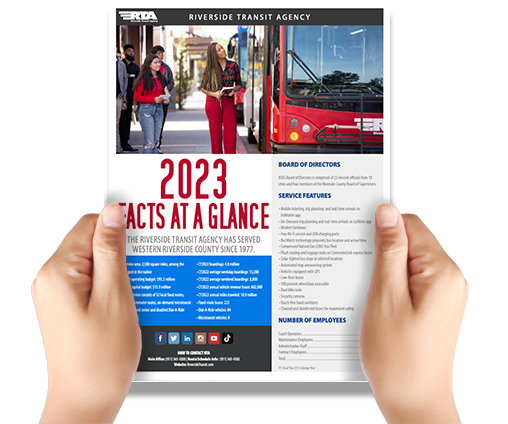 The Riverside Transit Agency, Riverside County's multi-modal transportation provider, shall provide for a variety of transportation needs in a cost-effective and efficient manner for all the residents of our member communities. The Agency is committed to providing safe, reliable, courteous, accessible, and user-friendly services to our customers.

RTA is governed by a board of directors comprised of 22 elected officials from 18 cities in western Riverside County and four members of the County Board of Supervisors.

Transportation plays a pivotal roll in continuing to enhance our environment. Bus service, in and of itself, improves air quality by giving the public and alternative to driving their cars. The air-quality benefit of transit is enhanced with the use of cleaner, low-emission buses. RTA continues its commitment to promoting cleaner air in our community by operating CNG buses. Because of extensive investment in CNG technology and fueling stations in Riverside and Hemet, RTA has become a fueling station for CNG vehicles operated by several agencies including Omnitrans and the City of Riverside.